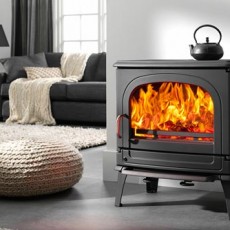 The Drugasar story began in 1754, when a group of Dutch farmers discovered that their soil was rich in iron ore. They began extracting the metal and smelting it down to produce pewter.

This was then cast into pots, pans and other household items, and the company of Diepenbrock & Reigers of Ulft (DRU) was formed. The products rapidly developed to include solid fuel fires and cookers.

The company was one of the first in the world to produce natural gas fires, and has always been at the forefront of gas heating technology. During the 1930s, its engineers developed the balanced flue system, which today is used by gas heating manufacturers throughout the world.

Instead of a fire being located in a chimney, it is attached to a flue that goes through an external wall. Air is drawn from the outside for combustion, resulting in much greater comfort and safety for the customer, as well as saving money on fuel!

In 1951, an Austrian businessman called Fred Borchardt began selling DRU heaters from a shop on in London. Whilst the fires were effective in the home, their large capacities and powerful outputs made them particularly suitable for public buildings, especially those without a central heating system. Consequently, Mr. Borchardt established a very successful business supplying churches, schools, the military and other public institutions.

Drugasar was set up in 1975 to sell and maintain DRU heaters throughout the UK. The name was an acronym for DRU, gas and air, and its offices were established in Manchester, where the company still is today.

Since its original introduction to the UK in 1951, Drugasar has supplied heaters to over 5000 churches and associated buildings, as well as thousands more schools, MOD properties, local government offices and other commercial premises.

Some more unusual applications have included lighthouses, zoos, racecourses, buses, trains and even a butterfly farm!

DRU fires can be found in Windsor Castle, the Sandringham Estate, Charterhouse School, Coalbrookdale Church in Ironbridge and the famous Jamaica Inn in Cornwall.

Looking to the future

Drugasar is now wholly owned by DRU in The Netherlands. This has given it the financial stability and resources to grow and develop new products for the changing market of the 21st century. The company is very successful in the domestic gas fire sector, and now has the world’s largest range of room-sealed commercial gas heating products.

DRU prides itself on its technical innovation. Its modern gas fires, balanced flue and powered flue heaters work at up to 85% efficiency.

Please login to add your review.